My time in Japan comes to a close as I enter the last week of my stay here. The experience so far has been nothing short of crazy.

I was fortunate to spend the summer of ‘18 in Tokyo doing my internship at Mercari, an e-commerce unicorn. I spent most of my working days writing Android code for the main Japanese marketplace app-Mercari. My weekends were well spent touring around Japan. This is an attempt to lookback and document some of my adventures in Japan. Most of the following adventures were made with a varying subset of the 8 co-interns I was lucky to be in company of.

We were planning to get the 2 day Disney Land + Disney Sea pass, but better judgement prevailed and we went ahead with only getting the Disney Sea tickets.
This was my first Disney experience and it was the best theme park experience I had so far. The landscapes were beyond amazing. Being a weekend, it was super crowded. But with our strong fast pass game, we managed to ride through to most of the attractions with great efficiency. The evening fireworks show- Fantasmic was true to its name. I walked over 15k steps that day and returned home with tired legs. 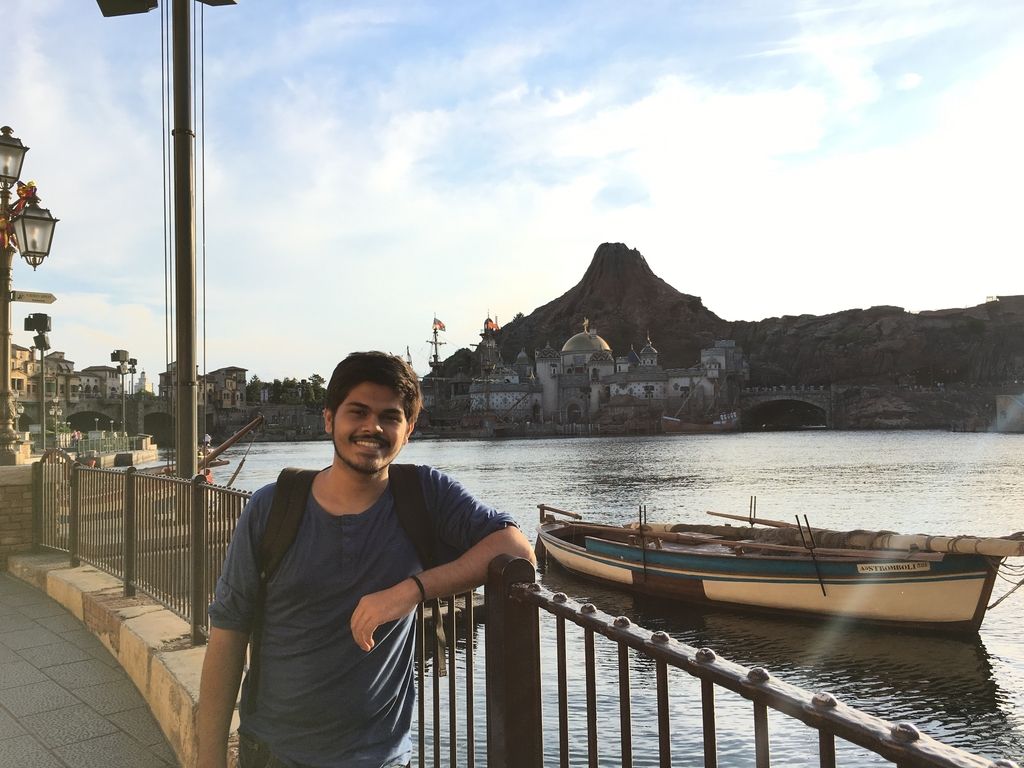 With our first attempt at making a booking for FujiQ online having failed, we were left with an empty weekend. I decided to make the most of it by going shopping.
I went to Akihabara, the electric town of Japan, filled with electronic stores of all sizes and interspersed with Anime cafes and Manga stores of all sorts. I explored the world’s largest electronics store- the Yodobashi Camera. I bought a few things from BIC Camera and also a lot of handy items from small stores around. I went to Gachapon store and got a few capsule toys. I roamed around and went to a few other interesting stores as well… 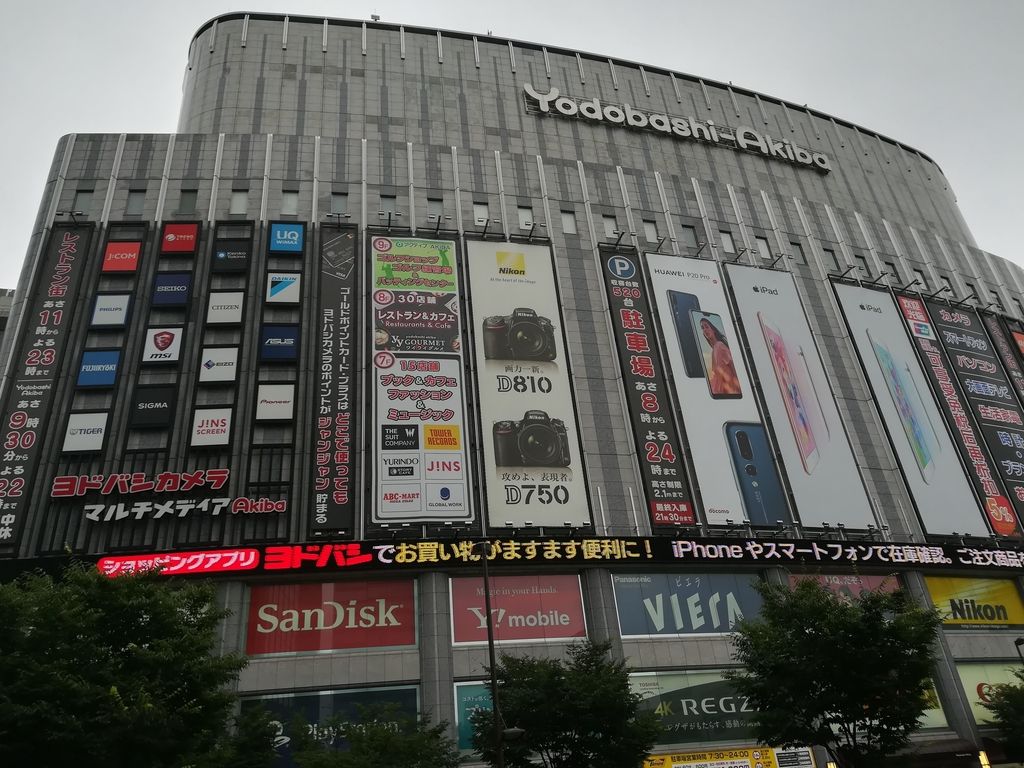 How can you come to Japan and not go to the ancient capital to witness true Japanese tradition?
We took the Shinkansen to Kyoto on our third weekend. We left early Saturday morning and reached there by 10 AM. We had planned an efficient route that would get us to a lot of good spots without having to travel a lot. We started off with Nijo Castle, which was home to the shoguns from the Edo period. Next up, we went to the Imperial Palace and then to Kinkakuji, the golden shrine. We paused for lunch and then continued to Ryōan-ji, a Zen temple with a rock garden. We then headed to the Fushimi-inari shrine. The climb to the top was tiring, but the view from the top was spectacular. After sundown, we made our way to the Ryokan we had booked for the night. It was a small place, but we had a fun night sleeping in traditional Japanese rooms. The next day, we went to the Arashiyama bamboo forest and enjoyed boating in the Hozugawa river. Later, we went to the Arashiyama monkey park to watch some macaque from real close. We returned in time to catch one of the last Shinkansen back to Tokyo. 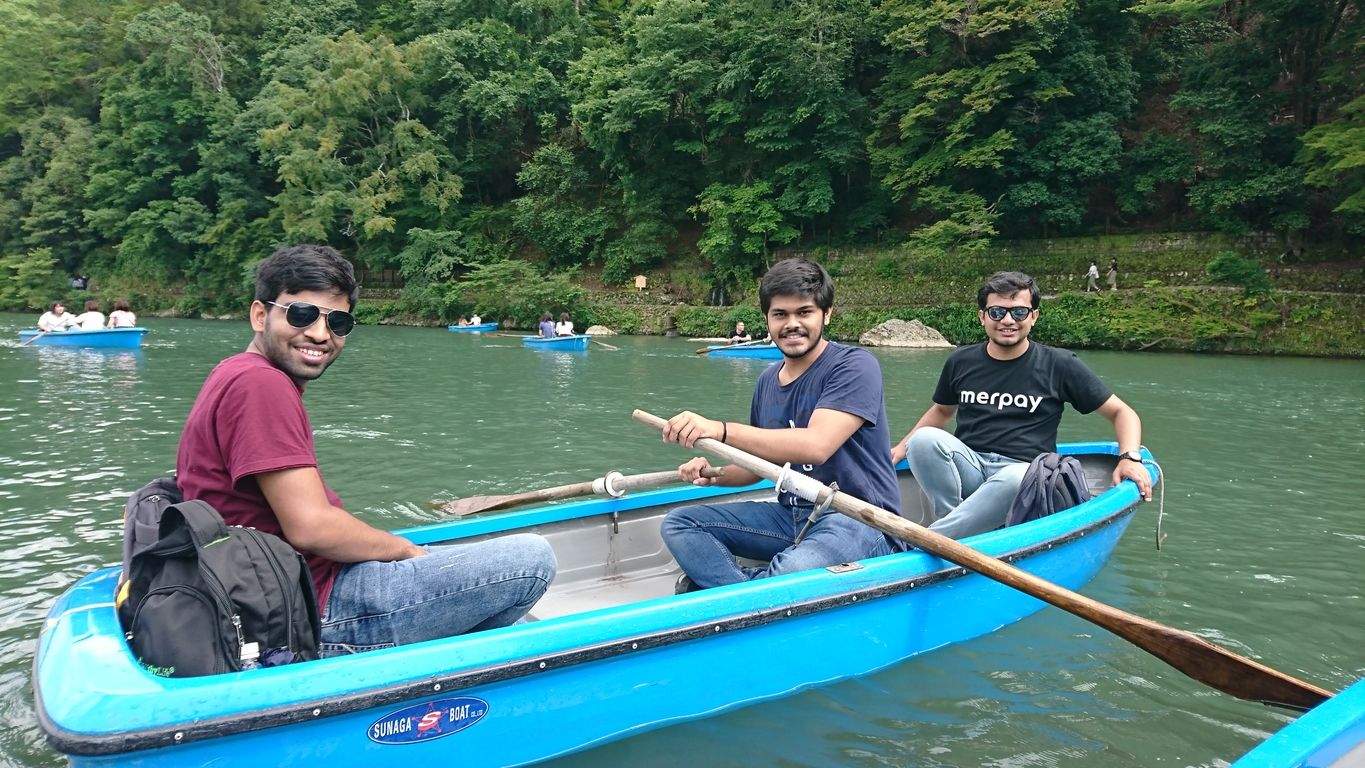 We really got lucky with this one. With most weekends having heavy rainfall forecast, we had almost given up on our roller coaster hopes. Until one Saturday we made an instant plan and went ahead since the next day showed very little rainfall.
We took the Q-Pack which includes the to and fro ride from Shinjuku and the day pass to the park. To make the most out of our lucky chance, we further bought express passes to three of the crowded roller coasters. There are a total of four popular roller coasters- Fujiyama, Eejanaika, Takabisha and Do-Dodonpa. Fujiyama surprisingly had smaller queues and we ended up going for Fujiyama twice despite not having a fast pass for it. With the express passes, we were able to get done with the popular rides in less time and had enough time on our hands to try out most of the other attractions as well. Overall, I enjoyed a lot. Some of the roller coasters are world record holders and it was a completely thrilling experience to ride them. 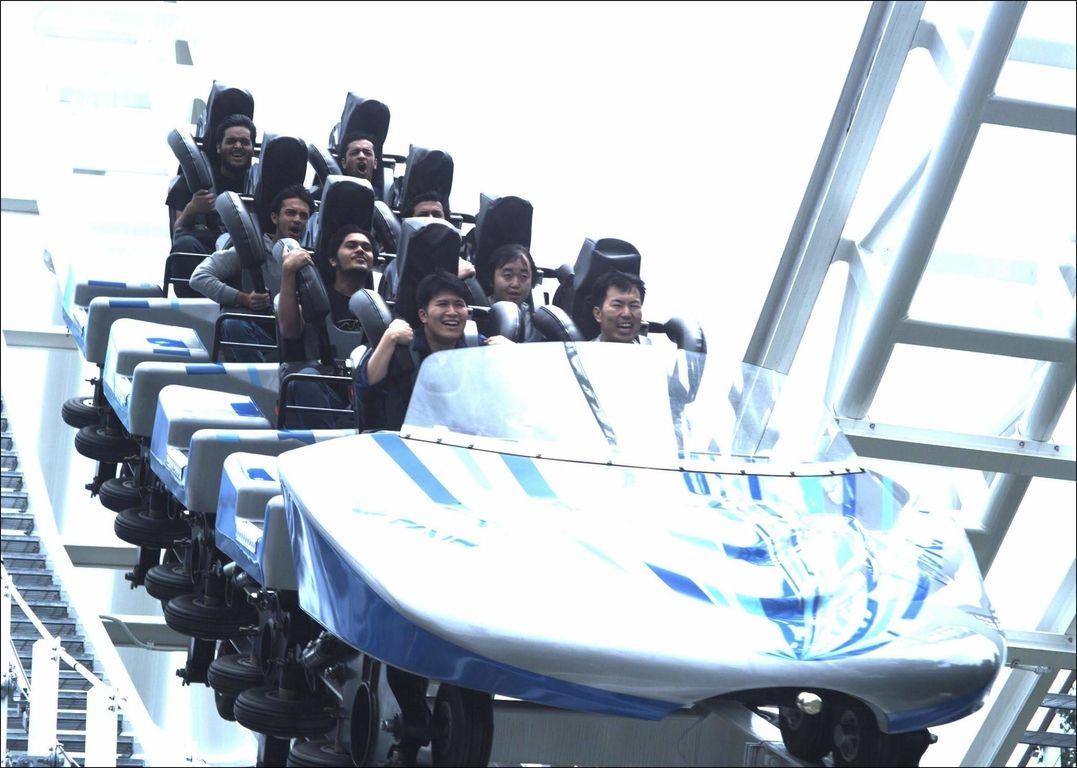 This was definitely one of the best weekends spent in Japan. Izu Oshima is the largest of the Izu islands that fall under the administeration of Tokyo. It has a population of around 2500 people but for long stretches, we barely saw any people when we went cycling around the island.
We took the overnight ferry from Tokyo to Oshima, that docked at early Saturday morning. We quickly went ahead and rented out cycles to begin our expedition. The island’s perimeter has a nice circuit made for cycling. Cycling along the oceanline with a constant ocean breeze and through the mountains was definitely my best cycling experience so far. We cycled for a good 30+ km and headed back to our hotel. It was a small nice place called the Book Tea Bed. We went to the Hama-no-yu onsen next to have a hot water bath to relax our tired muscles whilst watching the sun set on the horizon as we sat at the edge of the island surrounded by the ocean. What followed was a good night’s sleep and another cycle journey to head to the Okata port where we went snorkeling. Snorkeling was fun and we saw a lot of fish. Bringing a GoPro to record the underwater sights and the cycle journeys was one of my better decisions. We had to rush back to Motomachi port for our ship back to Tokyo. The ship had some of the coolest vending machines, ones with built in microwave for warm food and hot water dispensers for cup noodles. 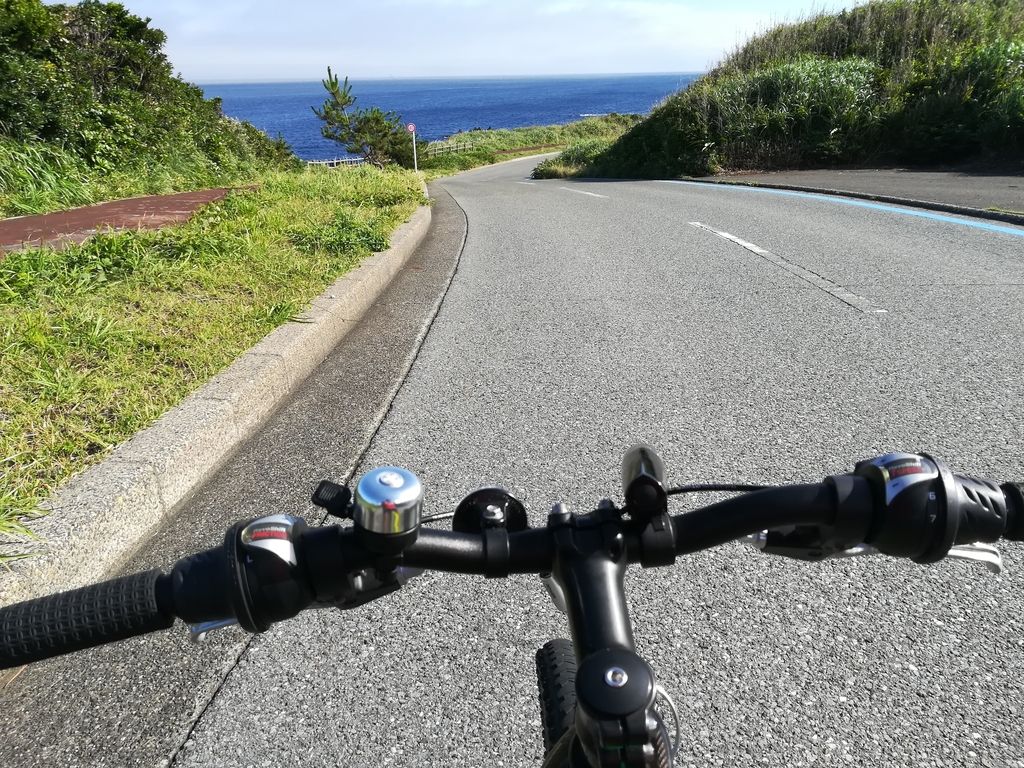 This was probably the stupidest, albeit the most adventurous thing I did in Japan. The proper and recommended way to climb Mt. Fuji and witness the literally ‘breath-taking’ sunrise involves making a climb during day, and resting in a hut for the night, waking up energized and making to the top just in time for the sunrise. We weren’t able to book a hut, thanks to our last moment planning and we decided to do it the hard way- rush to the top, see the sunrise and come back.
We made it to the 5th station at around 16:00 and started the climb at 19:30. The Yoshida trail is the easiest way to the top and that’s the one we took. With frequent stops, we took it slow and made it to the top at 04:00 just in time to see the sunrise. The view was nothing short of spectacular, but it was freezing cold at the summit. The temperature touched zero degree Celcius and there were super strong chilly winds blowing. Altitude sickness and asphixiation had started taking a toll on me. It was a super cloudy day and the crater was completely shielded with fog. The sun was hidden behind the clouds intermittently too. Somehow, I survived and started descending. The descent was torturous with steep curved paths that have slippery gravel for extremely long stretches. With an extreme body ache and a severe headache, I took the bus to take me home. 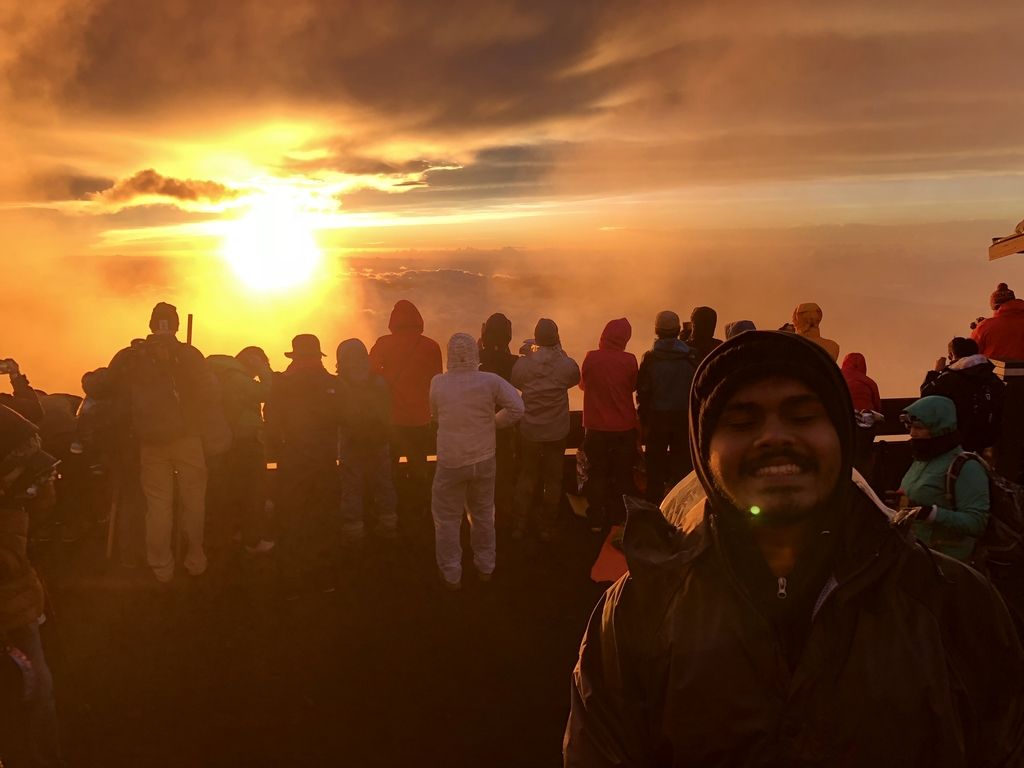 There were a few mini adventures on weekdays, but the bulk of my expeditions in Japan have been recorded above. Woo!